In a recent write-up about furniture maker Steelcase’s production line, humans were described as being solely present to guide automation technology.

The New Yorker wrote about Steelcase’s labor management, “A decade ago, industrial robots assisted workers in their tasks. Now workers — those who remain — assist the robots in theirs.”

What manufacturing looks has changed drastically in a short time. As a retired Siemens executive recently said, “People on the plant floor need to be much more skilled than they were in the past. There are no jobs for high school graduates at Siemens today.”

But better digitization and cyber-physical technologies are all augmenting the efficiency and manpower available to the workers. Here’s how emerging technology like augmented reality (AR), wearables, and exosuits are fitting in.

AR AND MOBILE ARE DIGITIZING THE INSTRUCTION MANUAL 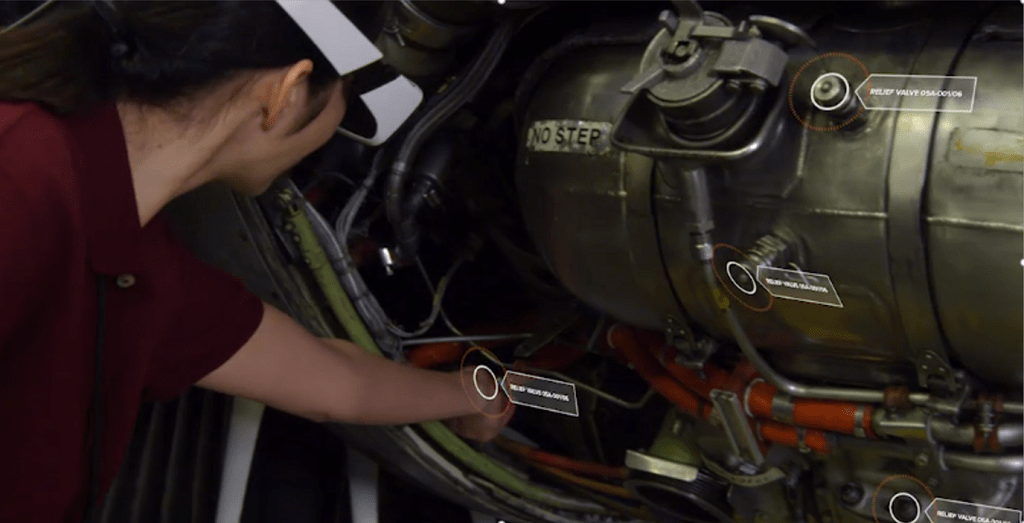 Augmented reality will be able to boost the skills of industrial worker.

In addition to being a hands-free “browser” that can communicate factory performance indicators and assign work, AR can analyze complicated machine environments and use computer vision to map out a machine’s parts, like a real-time visual manual. This makes highly skilled labor like field service a “downloadable” skill (in a manner not unlike The Matrix). 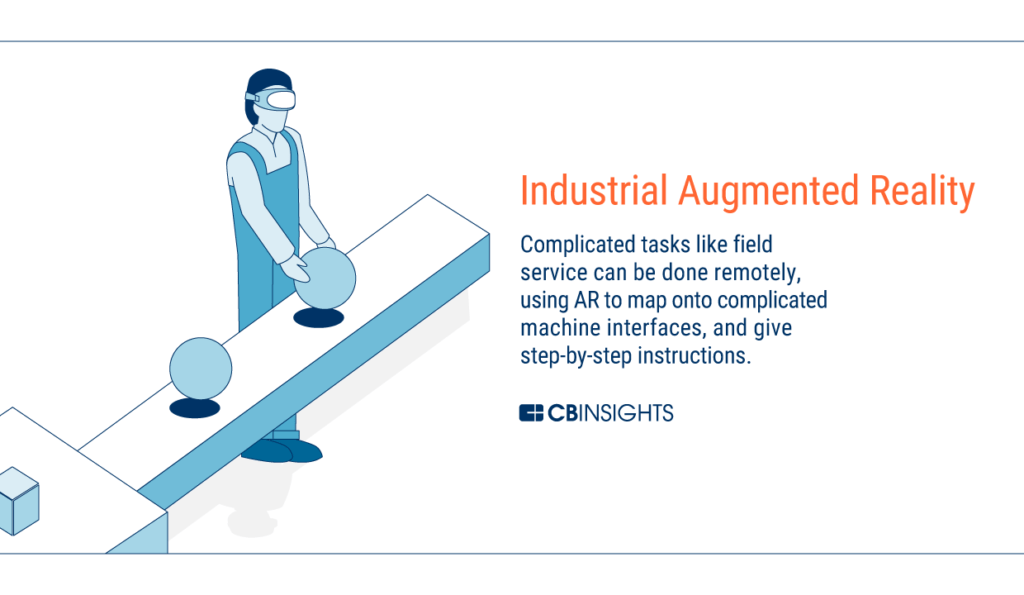 Daqri and Atheer are well-funded headset makers that focus on industrial settings. Upskill‘s Skylight platform (below) makes AR for the industrial workforce using Google Glass, Vuzix, ODG, and Realwear headsets. The company raised nearly $50M from the corporate venture arms of Boeing and GE, among other investors.

Many AR makers envision the tech working like a handsfree “internet browser” that allows workers to see real-time stats of relevant information. Realwear‘s wearable display doesn’t aspire to true augmented reality like a Daqri headset, but even a small display in the corner of the eye is fairly robust. 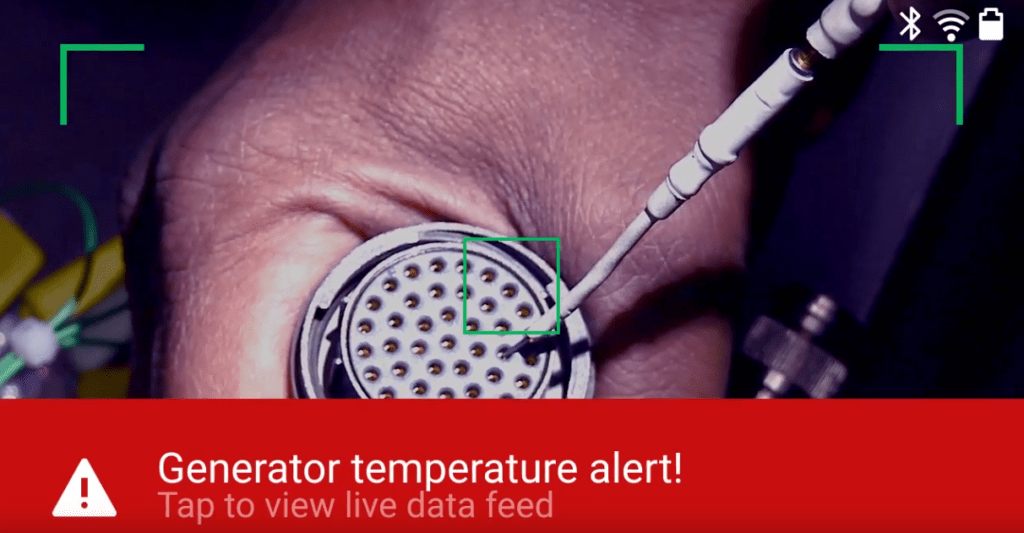 Others like Scope AR do similar work in field service using mobile and iPad cameras, employing AR to highlight parts on industrial equipment and connecting to support experts in real time. This saves on the travel costs of flying out people to repair broken equipment.

Parsable, which works with mobile phones, is a workflow platform that gives out tasks and digitizes data collection, something that is often done with pencil and paper in industrial environments.

As the maxim goes, “what gets measured gets managed,” and in an area where robots are a constant competitive pressure, manufacturing organizations will invest in technologies that digitize human efforts down to each movement.

Exoskeleton technology is finally becoming a reality on factory floors, which could drastically reduce the physical toll of repetitive work. Startups here are making wearable high-tech gear that bear the load alongside a worker’s limbs and back. 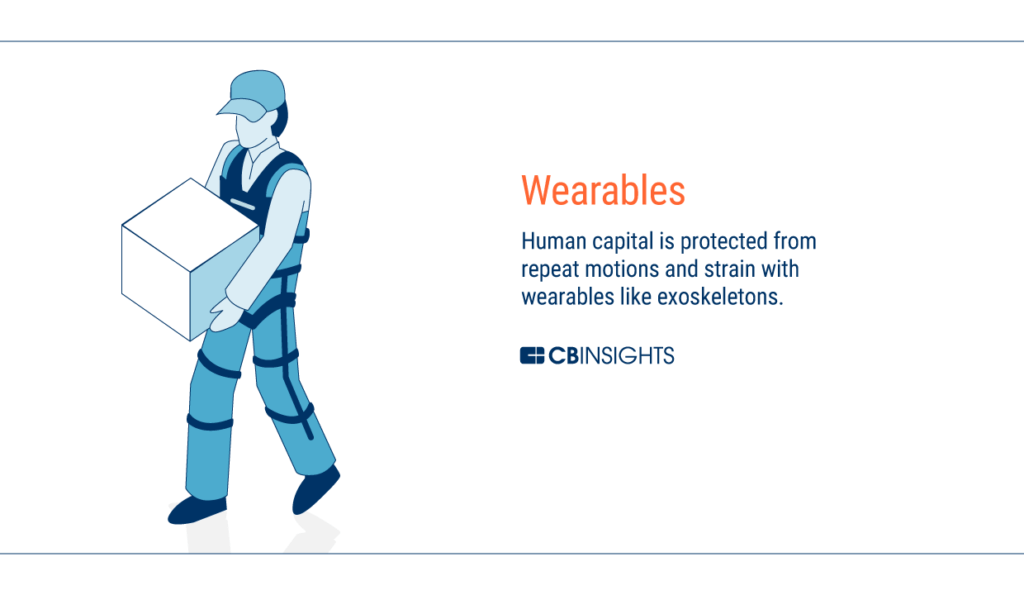 Ekso Bionics, seen below, is piloting its EksoVest suit at Ford Motor Company’s Michigan assembly plants, and workers using the suit have reported less neck stress in their daily demands. The EksoVest reduces wear from repetitive motion and, unlike some competing products, provides lift assistance without batteries or robotics. Ekso’s CTO has said the long-term strategy is to get workers accustomed to the technology before eventually moving into powered exoskeletons. 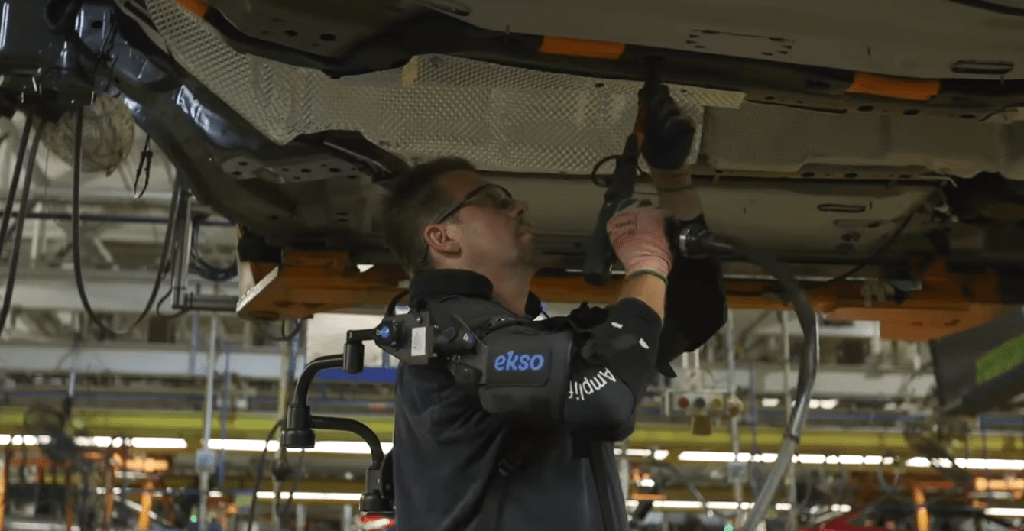 Sarcos is another well-known exosuit maker, which has raised from corporates including Schlumberger, Caterpillar, and Microsoft and GE’s venture arms. Sarcos is more strictly focused on remote controlled robotics and powered exoskeletons, which can lift 200 lbs repeatedly. Delta Airlines recently said it would join Sarcos’ Technical Advisory Group to pilot the technology.

In similar territory is Strong Arm Technologies, which makes posture-measuring and lift-assisting wearables. Strong Arm touts predictive power to intervene before risk of injury or incident, and is positioned as a labor-focused risk management platform.

Where humans are still needed for some dirty and dangerous tasks, wearables and exoskeletons will augment human’s ability to do work while also promoting safety.

Automation is coming for dirty, dull, and dangerous jobs first.

Already, many human jobs within the mass-production assembly line have been crowded out by automation. Cyber-physical systems like industrial robotics and 3D printing are increasingly common in the modern factory. Robots have gotten cheaper, more accurate, safer, and more prevalent alongside humans.

Consumer tastes have also broadened, and manufacturers are trying to keep up with increasing demands for customization and variety.

Visions for Industry 4.0 involve a completely intelligent factory where networked machines and products communicate through IoT technology, and not only prototype and assemble a specific series of products, but also iterate on those products based on consumer feedback and predictive information.

Before we reach a world where humans are largely uninvolved with manufacturing, modular design can help existing factories become more flexible. 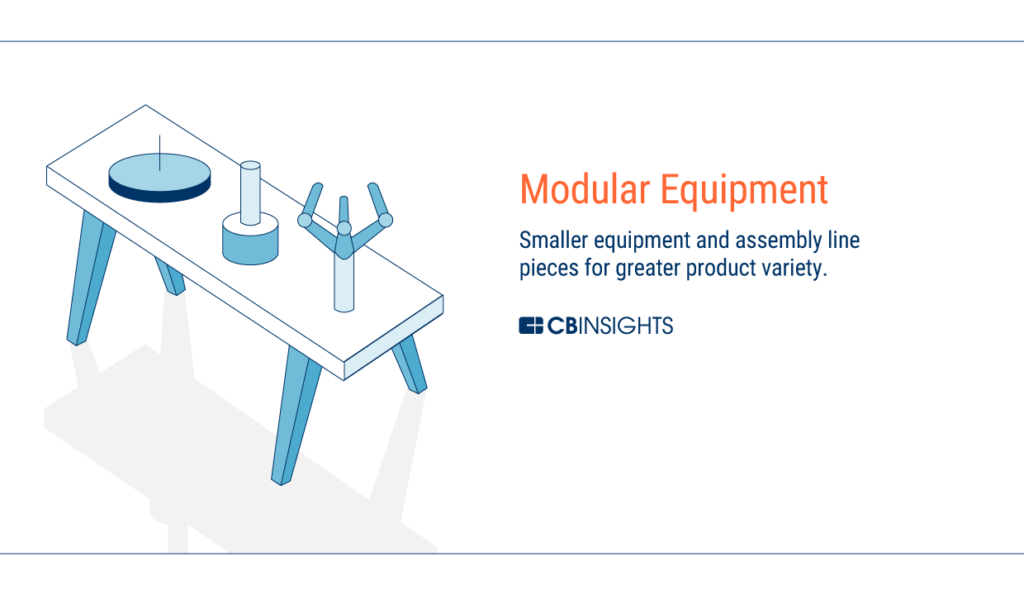 Modularity allows the factory to be more streamlined for customization, as opposed to the uniformity that’s traditional for the assembly line. Modularity could come in the form of smaller parts, or modules, that go into a more customizable product. Or it could be equipment, such as swappable end-effectors on robots and machines, allowing for a greater variety of machining.

Presently, mass-production is already refashioning itself to handle consumer demand for greater customization and variety. 90% of auto makers in a BCG survey said they expect a modular line setup will be relevant in final assembly by 2030. Modular equipment will allow more models to come off the same lines.

Startups are capitalizing on the push toward modular parts.

Seed-stage company Vention makes custom industrial equipment on-demand. Choosing from Vention’s modular parts, all a firm needs to do is upload a CAD design of the equipment they want, and then wait 3 days to be sent specialized tooling or robot equipment. Many existing factories have odd jobs that can be done by a simple cobot (collaborative robot) arm or custom machine, and these solutions will gain momentum as factories everywhere search for ways to improve efficiency.

Industrial robotics are responsible for eroding manufacturing jobs, which have been on the decline for decades. As a report by Bank of America Merrill Lynch explains: “long robots, short humans.”

But the latest wave of robotics seems to be augmenting what a human worker can accomplish.

Cobots (collaborative robots) are programmable through assisted movement. They “learn” by first being moved manually and then copying the movement moving forward. These robots are considered collaborative because they can work alongside humans. 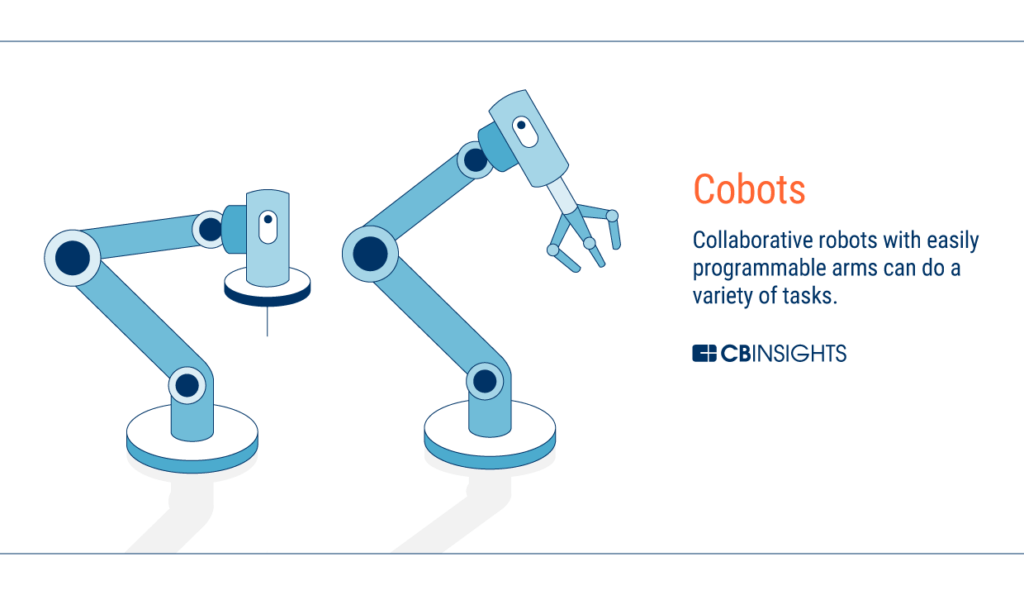 Whether these are truly collaborative or rendering human labor redundant remains to be seen. After a Nissan plant in Tennessee added autonomous guided vehicles, no material handlers were laid off with the increased productivity. European aircraft manufacturer Airbus also uses a mobile robot, which works alongside humans to drill thousands of holes into passenger jets.

While even the best robots still have limitations, economists fear that automation will eventually lead to a drastic restructuring of labor. 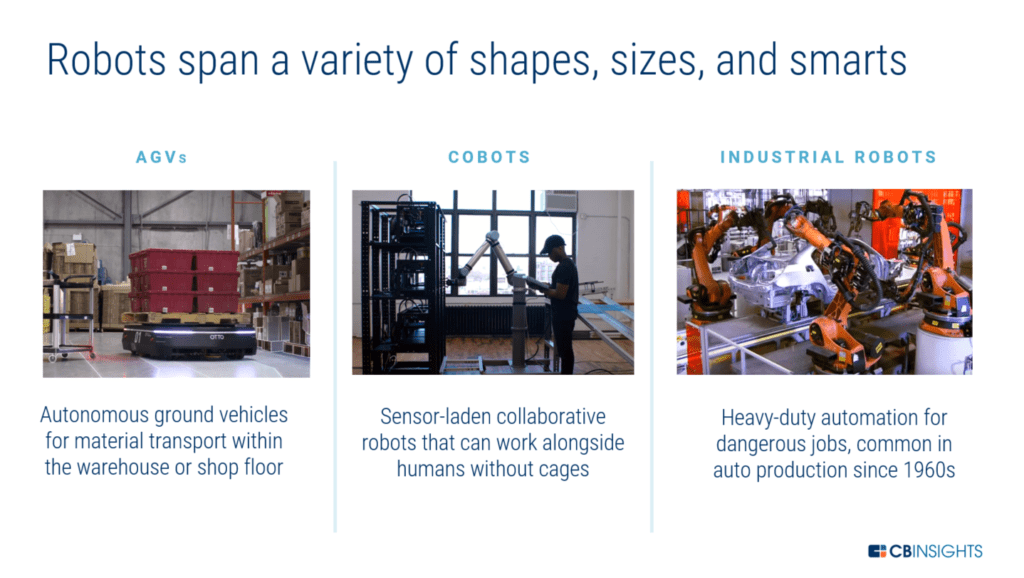 Due to rising labor costs worldwide, robotics are presently causing a new wave of re-shoring — the return of manufacturing to the United States.

In a 2015 survey by BCG, 24% of US-based manufacturers surveyed said that they were actively shifting production back to the US from China, or were planning to do so over the next two years — up from only 10% in 2012. The majority said lower automation costs have made the US more competitive.

Robotics have become invaluable for monotonous jobs such as packaging, sorting, lifting repeatedly. Cobot manufacturer Universal Robots says some of its robot arms pay for themselves in 195 days on average. As a whole, the category of collaborative robots are priced on average at $24,000 apiece.

In the near term, the reprogrammable nature of cobots will allow manufacturing firms to become more customized and work in parallel with existing equipment and employees. On a longer time horizon, however, robotics will be the engine for moving towards “lights-out” manufacturing.

Using metal additive manufacturing for one-third of components, GE made an engine that burns 15% less fuel than previous designs. GE says it will begin testing the Cessna Denali engine for potential flight tests in 2018. 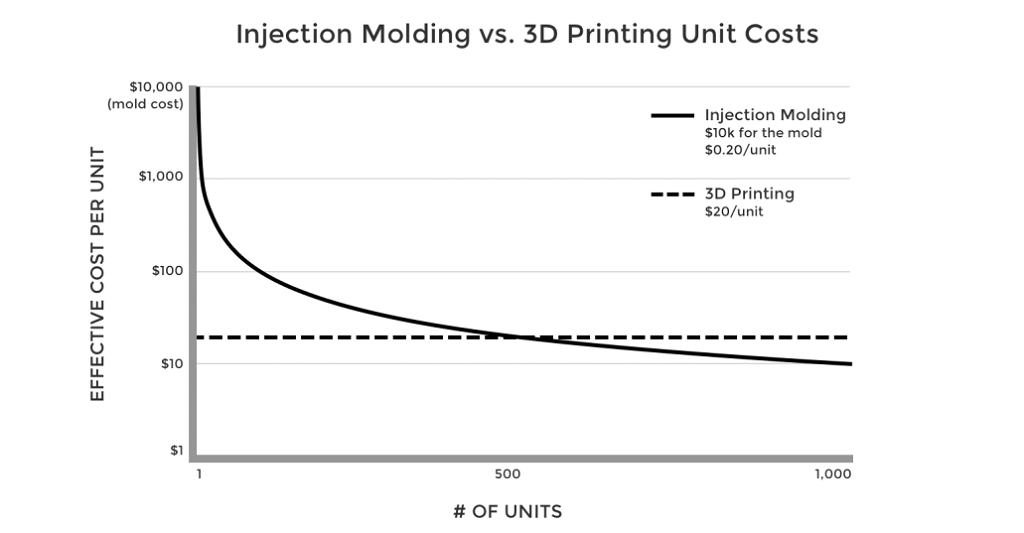 Manufacturers will increasingly turn to 3D printing as mass-customization takes off within certain consumer products.

Shoes have become one popular use case to watch. For example, Adidas has partnered with Carbon to mass-print custom athletic shoes. Additionally, other 3D printing services companies like Voxel8 and Wiiv have positioned themselves specifically for the shoe use case. 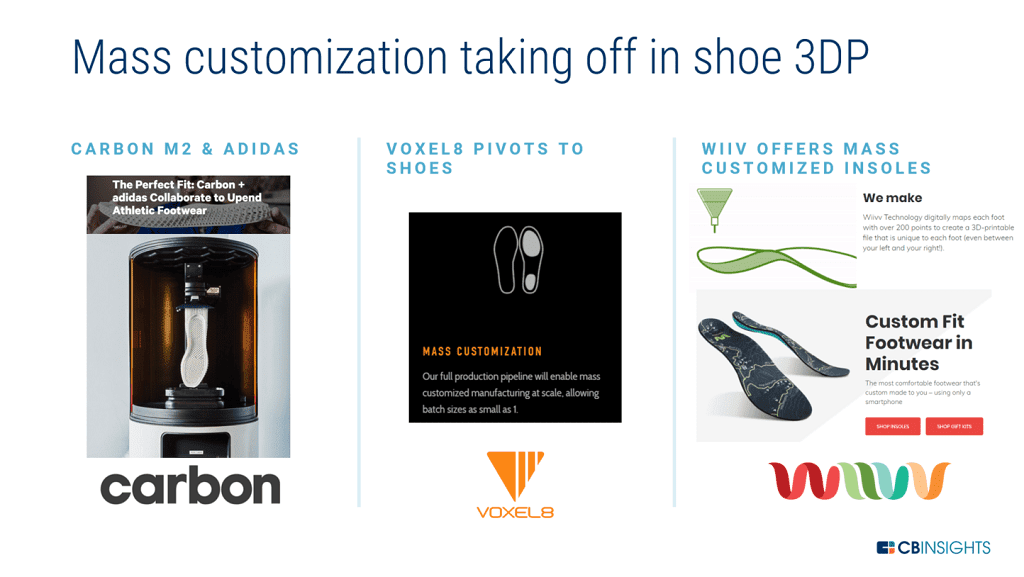 Just a few years from now, it may be more commonplace to see mass-customized parts in consumer electronics, apparel, and other accessories — all brought to you by 3D printing. Additionally, if rocket-printing startup Relativity Space is any indication, the technology will also be applied to building large-scale industrial print jobs.

Industrial 3D printing is the hottest segment within the broader space, and many startups are aiming to deliver advanced materials that include carbon fiber or other metals with exotic properties.